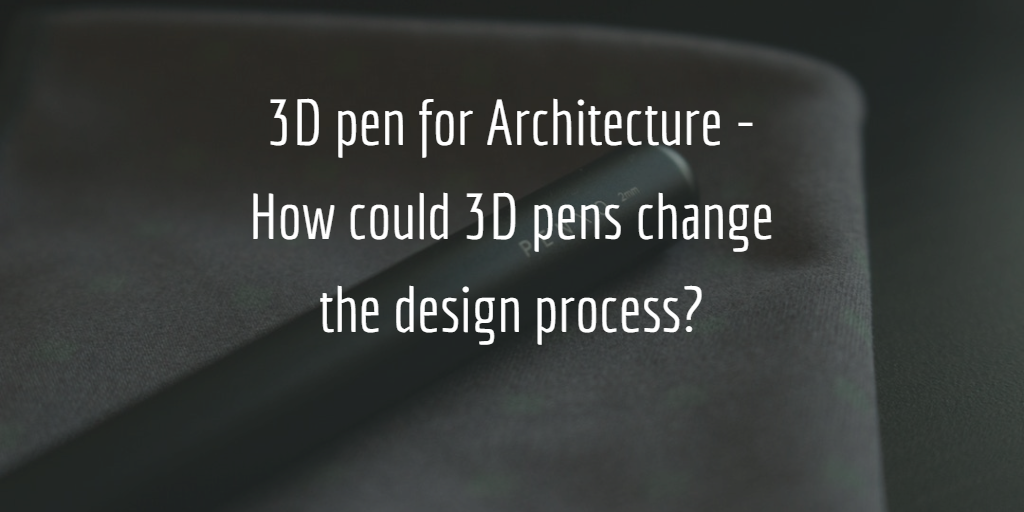 3D pen for Architecture – How could 3D pens change the design process?

3D pen for Architecture – How could 3D pens change the design process?

Welcome to Architect Gadgets and to the post “3D pen for Architecture – How could 3D pens change the design process?”.

3D pens are a new technology that has not yet seen mainstream adoption. On Amazon, most of the products you can see if you type “3D pen” are targeted to children. Although this might make you think that this technology is more of a toddler toy than anything else, it hides incredible potential for Architects and other designers or artists. How is that so? Well, with 3D pens, you can truly draw in 3D. It becomes a mix of sketching and model building. You get the 3D information of a model with the speed of a 2D sketch. It is sort of 3D printing, but with the advantages of speed and workflow that you find in sketching.

Some companies have already seen this potential and are exploring the more professional side of 3D pens. An example is LIX, which targets architects, designers and other artists and makers with its 3D pen LIX PEN UV. For LIX the idea of creating a 3D pen came from the restriction that standard 3D printers have, mainly in terms of speed and iteration. With a 3D pen, Architects are able to create 3D structures without the time consuming, traditional 3D printing machines, which require a computer program and 3D CAD knowledge to operate. Contrary to most 3D pens on the market, the LIX pen UV is a sleek and small product, with the main focus on its aesthetics, so it looks and feels like a normal pen. According to LIX, that required some work in order to fit all the components within the envelope, but results in a very nice and professional looking product. Kindly visit us Best Casino Land Review – Cinema Casino

How could 3D pens change the Architect’s design process?

How does it benefit your design process, though? Well, as I briefly mentioned above, it brings in a new concept, which we could call 3D sketching. The closest to this is, as we said, 3D printing and also model building but the speed of these and of the 3D pen are dramatically different. With a 3D pen, you can create a 3D figure in a matter of minutes or seconds, allowing for a much faster iteration and a big reduction in labour costs. Moreover, the flexibility of the 3D pen is as big as your imagination. According to LIX, their customers create forms which can go from building models to cars, passing through flowers, skulls or animals.

The flexibility of this tool will make it useful in many situations. However, here at Architect Gadgets, we think it has incredible potential in mainly 3 areas.

At this stage, if you are considering which shape your building should have and you are both sketching and building models in order to see how the building would fit in the plot and its surroundings, a 3D pen would be an incredible asset. You would be able to quickly build simple models with the different shape options you are considering and it would be much easier to see whether you are on the right track or not. For example, you would be able to check how different volumes interact depending on its location and proportion, whether a sloping roof would integrate better with the surroundings or if a flat roof would actually be a good contrast. All this, which currently need different models and sketches, can be concentrated in a few 3D-pen-drawn volumes.

Another area where 3D pens could, in our opinion, become a good asset is when the façades need to be designed. These are elements that can be difficult to design in 2 dimensions, especially for complex building shapes, where the richness of the façade can only be expressed in 3 dimensions. Although drawing the façades with a 3D pen would bring some challenges because all the different elements need to be joined, it would be nevertheless a very powerful tool where all the façade complexity would be easier to express, test and understand. This is especially true for façades where balconies or other horizontal elements are present, which have a very powerful influence over the façade final result but which tend to be rather invisible in the façade drawings (even if shadows are represented).

The third area where we believe a 3D pen would provide a competitive advantage over current methods of representation is in furniture design or layout design. In this instance, a simple envelope with the shape of the room being studied can be drawn. Within that, the different furniture elements can also be drawn, being able to play in 3D with its location, size, orientation and more. In a further step of development, the different items of furniture can be drawn more accurately in 3D, and the whole room can be easily represented with detailed 3D-pen-drawn miniature furniture.

As we have seen, 3D pens hide incredible potential for Architects and other designers. Even though most of the 3D pens on the market are designed as toys for children, some companies, such as LIX, have seen the potential of this new technology for Architects. With a 3D pen such as LIX 3D pen UV, Architects can bring a new tool into their design process. As we have explained, we think that 3D pens can be used in mainly 3 areas as far as Architects are concerned. The first area is early stage volume studies, where by simply using the 3D pen as a model making tool, the Architect can manage to speed up the iteration process, receiving a much earlier feedback on his own ideas by having them drawn in 3D much faster.
The second are is façade design. Even with the difficulty of having to have all the elements joined, façade design would be more communicative with a 3D pen, as some elements, such as balconies

Hello and welcome to Architect Gadgets!

Our aim is to provide the most relevant and engaging information for Architects.

Therefore, if you see any feature that you don’t like, please let us know using our contact form or directly at hello@architectgadgets.com.

We are a participant in the Amazon Services LLC Associates Program, an affiliate advertising program designed to provide a means for us to earn fees by linking to Amazon.com and affiliated sites. For more information, please visit our Affiliate Marketing Disclaimer page.

Architect Gadgets is born to help Architects fully embrace technology to maximise the quality of your designs and buildings while reducing costs. We are here to simplify your hardware choices and to improve your productivity.